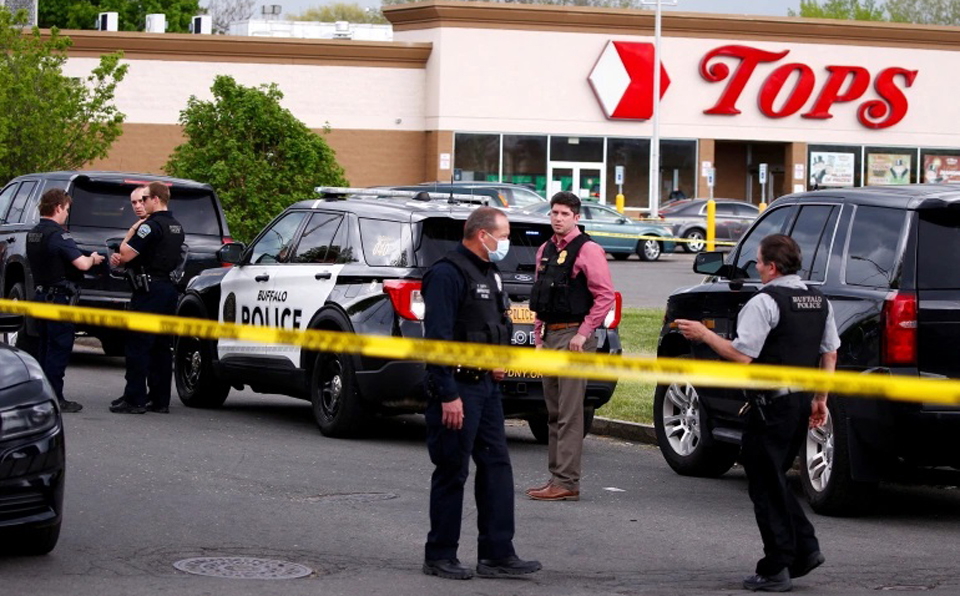 NEW YORK, May 15, 2022 (BSS/AFP) - A heavily armed 18-year-old man shot 10 people dead on Saturday at a Buffalo, New York grocery store in a "racially motivated" attack that he live-streamed on camera, authorities said.

The gunman, who was wearing body armor and a helmet, was arrested after the massacre, Buffalo Police Commissioner Joseph Gramaglia told a news conference.

Gramaglia put the toll at 10 dead and three wounded. Eleven of the victims were African Americans.

The gunman shot four people in the parking lot of the Tops supermarket, three of them fatally, then went inside and continued firing, Gramaglia said.
Among those killed inside the store was a retired police officer working as an armed security guard.

The guard "engaged the suspect, fired multiple shots," but the gunman shot him, Gramaglia said.

When police arrived, the shooter put the gun to his neck, but was talked down and surrendered, he added.

Stephen Belongia, special agent in charge of the FBI's Buffalo field office, told the news conference that the shooting is being investigated as a hate crime.

"We are investigating this incident as both a hate crime and a case of racially motivated violent extremism," Belongia said.

Erie County Sheriff John Garcia described the attack as "pure evil."
"It was straight up racially motivated hate crime from somebody outside of our community," he said.

John Flynn, the district attorney for Erie County, where Buffalo is located, said the suspect would be arraigned on charges of murder in the first degree, which carries a sentence of life without parole.

Asked if the shooter could face the death penalty on the federal level, the US attorney for the Western District of New York, Trini Ross, said: "All options are on the table as we go forward with the investigation."

Flynn said the shooter used an "assault weapon" -- a term that can apply to types of rifles and shotguns in New York -- but did not specify which kind.

A spokesperson for streaming service Twitch confirmed to AFP that the shooter used the service to broadcast the attack.

"We have investigated and confirmed that we removed the stream less than two minutes after the violence started," the spokesperson said, adding: "We are taking all appropriate action, including monitoring for any accounts rebroadcasting this content."

Byron Brown, the mayor of Buffalo -- which is located in western New York State, along the US border with Canada -- said the shooter "traveled hours from outside this community to perpetrate this crime."

"This is a day of great pain for our community," Brown said.
White House Press Secretary Karine Jean-Pierre said US President Joe Biden had been briefed on the "horrific shooting."

Biden "will continue to receive updates throughout the evening and tomorrow as further information develops. The president and the first lady are praying for those who have been lost and for their loved ones," Jean-Pierre added.

Senate Majority Leader Chuck Schumer, the senior US senator from New York, said in a tweet: "We are standing with the people of Buffalo."

The governor of New York, Kathy Hochul, also tweeted that she was monitoring the situation, and asked people in Buffalo to "avoid the area and follow guidance from law enforcement and local officials."

Last month, a "sniper-type" shooter opened fire in an upscale Washington neighborhood, wounding four people before taking his own life.

Police suspected that graphic video of that shooting which circulated online shortly afterward was filmed by the shooter himself, but have not confirmed the authenticity or if it was live-streamed.

Despite recurring mass-casualty shootings and a nationwide wave of gun violence, multiple initiatives to reform gun regulations have failed in the US Congress, leaving states and local councils to enact their own restrictions.

The United States suffered 19,350 firearm homicides in 2020, up nearly 35 percent as compared to 2019, the Centers for Disease Control and Prevention (CDC) said in its latest data.