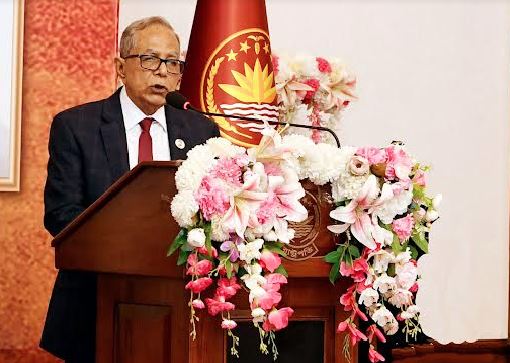 DHAKA, Jan 18, 2022 (BSS) - President M Abdul Hamid today asked the deputy commissioners (DCs) to develop a culture of transparency and accountability at all tiers of the administration.

Addressing virtually from Bangabhaban the "DC Conference-2022" in the capital’s Osmani Memorial Auditorium here,  he said: "Corruption is one of the key barriers to development and it is stalling the sustainable development… Therefore, a culture of maximum transparency and accountability must develop at all levels of the field administration.”

The Cabinet Division convened the three-day annual conference which could not be held in the last two years due to the COVID-19 outbreak.

Hamid addressed the administrative chiefs of divisions and districts, rallied in the capital to join the annual DC conference to interact with policymakers on development and governance issues and set out priorities and guidelines for working for the next one year.

The head of the state called upon the civil servants to serve as real "public servants" and give priority to greater interests of the country.

He said: “In your respective workplaces, keep up the difference between responsibilities and powers . . . Don't misuse power. Reach government services to people's doorsteps.”

Mentioning that the DCs Conference is an important forum to discuss the challenges faced by the administration at the field level and the steps taken to provide civic services, the President said, "You are acting as the coordinator and supervisor of the various government activities at the field level, which is playing an important role in the country’s development as a whole."

"You and we are the servants of the people…So, you will fulfill your responsibilities as the people’s servants to ensure the delivery of the government services at people’s doorsteps, ”he added.

The President reminded the DCs - "Serving the people is not a matter of kindness or generosity at all."

Stressing on the efficient leadership of the district administrative officers, he said the DCs must provide effective and proper leadership to fulfill the people's fundamental rights, ensure social safety and women empowerment. "Keep in mind so that no real poor should remain out of the programme coverage," the President added.

He said the government has given special importance to eco-friendly rural development, which is different from previous years and the DCs must play a very positive role to ensure all kinds of facilities in villages like in cities.

Referring to people’s direct involvement in land management along with land disputes and related cases in rural areas, the President said the government is trying to deliver services on those in the digital system.

But at the time of the land record, some unscrupulous staffers and employees are reportedly committing many irregularities in collaboration with the local influential middlemen, intensifying the sufferings of people, he added.

The President directed the DCs to be strict on those issues and take tough actions to stop any irregularity in land management by ensuring punishment of the officials and employees involved.

The President called upon the DCs to play a strong role in the proper management of the service centers and reach the IT services to the grassroots level.

Abdul Hamid advised the DCs to be more active in the implementation of ongoing government programs for conservation of biodiversity, social forestry, flood control and drainage, wetland development and mitigation of natural disasters resulting from climate change affects.

In order to make the development of the country balanced and people-oriented, the President directed the district and upazila headquarter level officials to be strict in protecting forests, rivers and hills from illegal occupants.

Referring to the incumbent government’s 'Zero Tolerance' policy on drugs, Abdul Hamid said the DCs should be vigilant against narcotics and take a concerted initiative to build a drug-free society using their talents and skills.

Being imbued with the spirit of the liberation struggle and patriotism, the DCs would work with devotion and perfection to materialize the dream of Father of the Nation Bangabandhu Sheikh Mujibur Rahman, he hoped.

At the very outset of his address, the President paid tribute to Bangabandhu Sheikh Mujibur Rahman, the greatest Bengali of all time, all valiant freedom fighters and other patriotic souls who had to sacrifice their lives for the sake of the country and nation in different times.