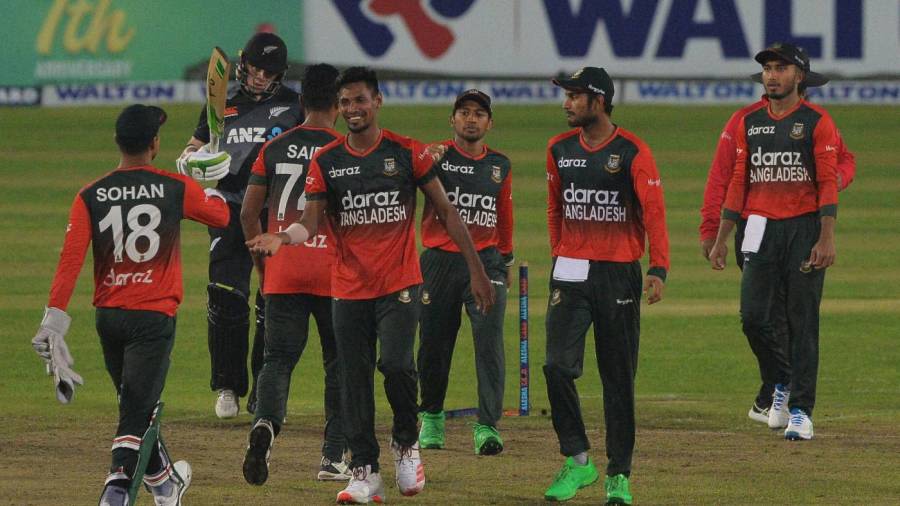 DHAKA, Sept 5, 2021 (BSS)— New Zealand put up 128-5 in the third Twenty20 International against Bangladesh at Sher-e-Bangla National Cricket Stadium today in a bid to keep them alive in the series.

A 66-run partnership for the unbeaten sixth wicket partnership between Henry Nicholls and Tom Blundell was key in helping the side’s bowlers give a total to defend on a slow surface.

Nicholls top-scored for the side with 29 ball-36 not out, hitting three fours. Blundell also smote three boundaries in his unbeaten run-a-ball-30.

Bangladesh are aiming to confirm the first ever T20 series against New Zealand after their seven-wicket and four-run victory in the first two matches.

The hosts were on top of the Kiwis by reducing them to 62-5 and it seemed New Zealand captain Tom Latham’s decision to bat first backfired.

Fast bowler Mustafizur Rahman drew the blood first, taking the wicket of Finn Allen (15), who recovered from Covid-19 to play his first match in the series.

Skipper Mahmudullah Riyad, who is playing his 100th T20 match as the first Bangladeshi and eight batsmen in the world overall, then made the occasion memorable by removing Rachin Ravindra.

After failing in the last two matches, Rachin Ravindra, who was playing so well paid the price of a big shot to be out for run-a-ball-20.

But pacer Mohammad Saifuddin pushed the Kiwis on back foot with a double strike, dismissing Will Young for 20 and Colin de Grandhome for duck.

The situation for the visitors got worsened when off spinner Mahedi Hasan took the prized scalp of Tom Latham for 5 with a return catch. Bangladesh indeed raised the prospect of bowling New Zealand out below 100, removing Latham who made 49 ball-65 not out in the last match.

But Nicholls and Blundell helped the side bounce back, batting with caution and aggression that gave the visitors a chance to fight back in the match.

Saifuddin was the most successful bowler for Bangladesh with 2-28 while Mahedi, Mustafizur and Mahmudullah Riyad claimed one wicket apiece.