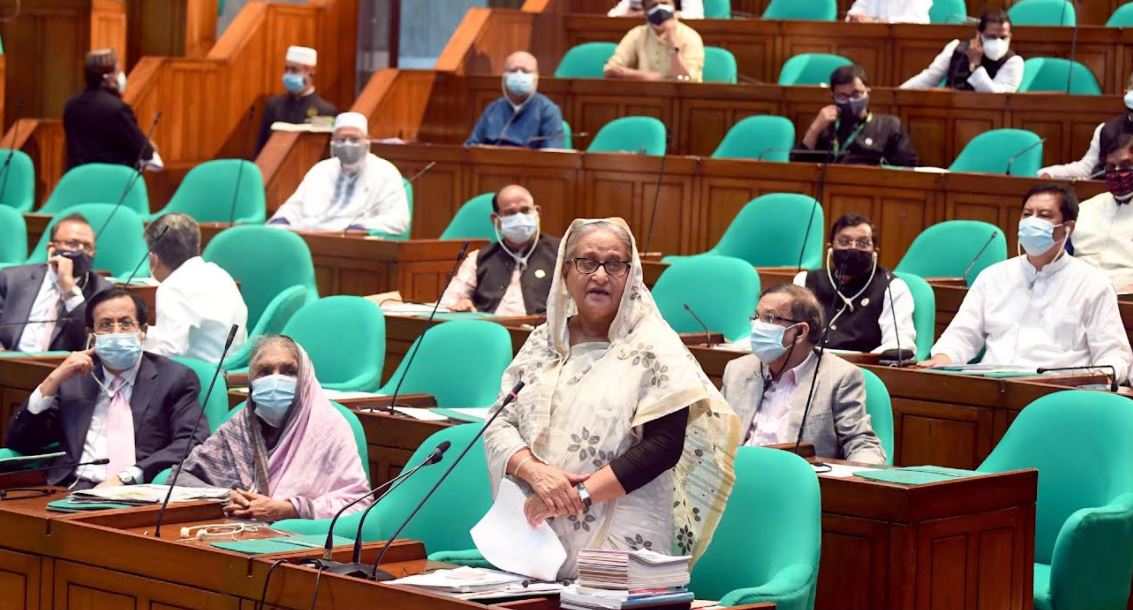 DHAKA, Sept 2, 2021 (BSS) – Prime Minister and Leader of the House Sheikh Hasina today told the parliament that measures are being taken to reopen the schools and colleges soon.

She called upon all to maintain the health guidelines alongside taking initiative to clean inside and outside of their houses to contain the spread of coronavirus and Dengue, a mosquito-borne viral disease.

“I have already directed to reopen the schools and colleges soon. Measures have already been taken to this end,” the PM said while taking part in a discussion on an obituary reference at the death of incumbent lawmaker Hasibur Rahman Swapan from Sirajganj-6 constituency.

The Prime Minister added that teachers have already been administered the Covid-19 vaccines while measures have been taken to inoculate students of schools in accordance with the WHO (World Health Organisation) protocol.

In this connection, she said, “Teachers have already been given the jabs. Alongside the teachers, their families and other workers in the schools have been brought under the vaccination coverage. We are taking measures to inoculate the students of schools following the directives of the WHO.”

Speaker Dr Shirin Sharmin Chaudhury moved the condolence motion on the second day of the 14th session in the 11th parliament. The motion was later adopted unanimously.

Today's session of the parliament was adjourned after adoption of the obituary reference over the death of sitting Awami League, MP, Hasibur Rahman Swapan in order to pay last respect as per the tradition.

A one-minute silence was observed and a Munajat was offered seeking eternal peace of the departed soul. State Minister for Religious Affairs Faridul Haque Khan, MP, conducted the munajat.

Sheikh Hasina, the Leader of the House, reassured the countrymen that there is no problem of vaccines in the country, saying, “We are bringing vaccines from anywhere by any means.”

The Prime Minister said her government has already booked six crore doses of the Covid-19 vaccine and money has already been sent to this end.

She requested the countrymen to maintain the health guidelines such as wearing masks, washing hands and avoiding mass gatherings though the rate of Coronavirus infection is showing a decreasing trend.

The Prime Minister reminded all about the nature of the Covid-19, saying, “We are seeing across the globe that Coronavirus is showing a reducing trend and again it is coming with more strength.”

So, everyone should follow the health guidelines to ensure their protection, she said.

The premier suggested all to take steam of hot water and do gurgle whenever returning home from outside as part of the precaution against the deadly virus.

She said that the people have been suffering from dengue, adding that everyone should clean their houses and their surroundings to make sure that water cannot remain stagnant anywhere as the dengue mosquito usually lays eggs in the water-filled containers.

People would have to do their part as the government and city corporations are doing their parts to control the dengue, she added.

The premier also asked all to use mosquito nets at the time of sleeping as part of the precaution to check dengue.

Describing the August as a month of mourning, she said that Father of the Nation Bangabandhu Sheikh Mujibur Rahman along with most of his family members were killed on August 15, 1975 while 22 leaders and activists of the Awami League, including Ivy Rahman, were killed in the August 21, 2004 grenade attacks.

In this connection she said in an emotion-charged voice, “We have lost many colleagues in this parliament. We have adopted an obituary reference yesterday (Wednesday) at the death of a seasoned parliamentarian (Prof Ali Ashraf).Today, we have lost another parliamentarian.”

The Prime Minister said she heard the news of the death of Hasibur Rahman Swapan, who was undergoing treatment in Turkey, early this morning.

Sheikh Hasina, also President of the ruling Awami League, recalled the contribution of Swapan to the overall development of Shahjadpur which was a den of the outlawed Sarbohara once upon a time.

Describing Swapan as a dedicated political leader, she said he also did many social activities that included establishing schools and colleges.

The premier said the death of Swapan is a huge loss for the residents of Shahjadpur.

She prayed for eternal peace of the departed souls of the lawmakers who died of Coronavirus and from other reasons and conveyed deep sympathy to their bereaved family members.