Moderna submits application to US regulator for Covid booster shot 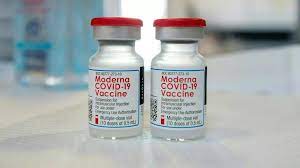 WASHINGTON, Sept 2, 2021 (BSS/AFP) - Moderna on Wednesday announced it had begun submitting an application to the US Food and Drug Administration to authorize a booster of its Covid vaccine after trial data showed a significant increase in antibodies against variants.

The third shot of the vaccine, known as mRNA-1273, was given to 344 participants in a study six months after their second dose.

The first two doses were 100 micrograms, while the booster was half that at 50 micrograms.

An analysis showed the booster increased neutralizing antibody levels against variants of concern, including Delta by more than 42.3-fold, Gamma by 43.6-fold, and Beta by 32-fold, with similar gains seen across age groups including over-65s.

"We remain committed to staying ahead of the virus and following the evolving epidemiology of SARS-CoV-2," Stephane Bancel, the company's CEO, said in a statement.

The company said it was also planning submissions to the European Medicines Agency (EMA) and other regulatory authorities in the coming days.

While Moderna is submitting data for a repetition of its first vaccine, which was developed against the original strain first identified in Wuhan, China, the company has previously tested a variant-specific booster against Beta, which was first identified in South Africa but has faded considerably in recent months.

That decision has left many health experts baffled, because although there is evidence that vaccine efficacy is waning against infection, it has remained largely stable against hospitalization and deaths -- the purpose for which the shots were conceived.

The move has also been criticized on the basis that most developing countries at this time don't even have enough vaccines to give their populations their first or second doses.

Beyond the questionable ethics and politics of failing to provide vaccines to poor countries, leaving these regions under-vaccinated for a prolonged period of time risks incubating new and possibly more dangerous variants that could evade the protective action of the current generation of vaccines.

Also on Wednesday, the FDA announced it would hold a meeting on September 17 to evaluate whether to authorize a third booster dose of Pfizer's mRNA Covid shot.