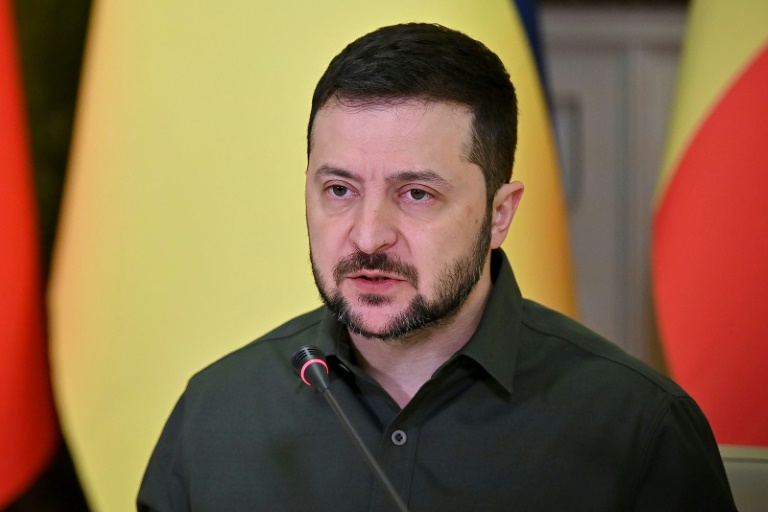 KYIV, Ukraine, Nov 26, 2022 (BSS/AFP) - President Volodymyr Zelensky vowed on Saturday that Ukraine would continue to resist Russian attacks, as the country marked the 90th anniversary of the Holodomor famine that affected millions of Ukrainians under Soviet leader Joseph Stalin.

Several European leaders travelled to Ukraine to pledge support after weeks of Russian strikes on Ukraine's energy grid caused widespread power and water cuts as temperatures plunge with the onset of winter.

"Ukrainians went through very terrible things... Once they wanted to destroy us with hunger, now -- with darkness and cold," Zelensky said in a video posted on social media.

"We cannot be broken," he added.

Leaders from Belgium, Lithuania and Poland were in Kyiv on Saturday to commemorate the victims of the 1932-33 Holodomor -- Ukrainian for "death by starvation" -- which is regarded by Kyiv as a deliberate act of genocide by Stalin's regime.

The Polish and Lithuanian prime ministers were in Ukraine for talks that, according to local media, could in particular focus on a possible new wave of migration from Ukraine this winter.

Ukraine's Border Guard Service said Polish Prime Minister Mateusz
Morawiecki was in Kyiv and "honoured the memory of the Holodomor victims" at a memorial in the Ukrainian capital.

"Arrived in Kyiv. After the heavy bombing of recent days, we stand with the people of Ukraine. More than ever before," he said on Twitter, posting photos of him shaking hands with Zelensky.

According to the Belga news agency, Belgium pledged a further 37.4 million euros ($39 million) of financial aid for Ukraine.

Authorities in Kyiv, where power has been out for many residents over the past three days following Russian strikes, said that 75 percent of electricity and 90 percent of heating was restored as temperatures dipped to near freezing.

"The most vulnerable countries must not pay the price of a war they did not want," Macron said in his statement.

And President of the Europen Commission Ursula von der Leyen vowed the EU would continue to support Ukraine, accusing Russia of using "food as a weapon."

Lawmakers from Germany are set to recognise the Holodomor as "genocide", according to a draft text of a joint resolution from Germany's ruling coalition and the opposition seen by AFP.

The German resolution says that up to 3.5 million people are believed to have died that winter alone but historians put the total death toll as high as 10 million.

At the tall candle-shaped Holodomor memorial centre in central Kyiv, a dozen Orthodox priests in black and silver robes gathered on Saturday for a religious ceremony for the victims of the famine.

"It was an artificial genocidal famine... Now when we experience this massive unprovoked war of Russia against Ukraine, we see history repeating itself," priest Oleksandr Shmurygin, 38, told AFP.

Among those gathered to commemorate the victims of the famine was
39-year-old lawyer Andryi Savchuk, who spoke of its "irreparable" loss for Ukraine.

"Stalin's system, the repressive state wanted to destroy Ukraine as a nation. Today we see that the efforts made by Stalin are continued by (President Vladimir Putin," he said.

The Holodomor has long been a source of hostility between Russia and Ukraine.

Russian contests the genocide designation, placing the events in the broader context of famines that devastated regions of Central Asia and Russia.

Russia and Ukraine announced their latest prisoner exchange on Saturday, with 12 Ukrainian and nine Russian released.