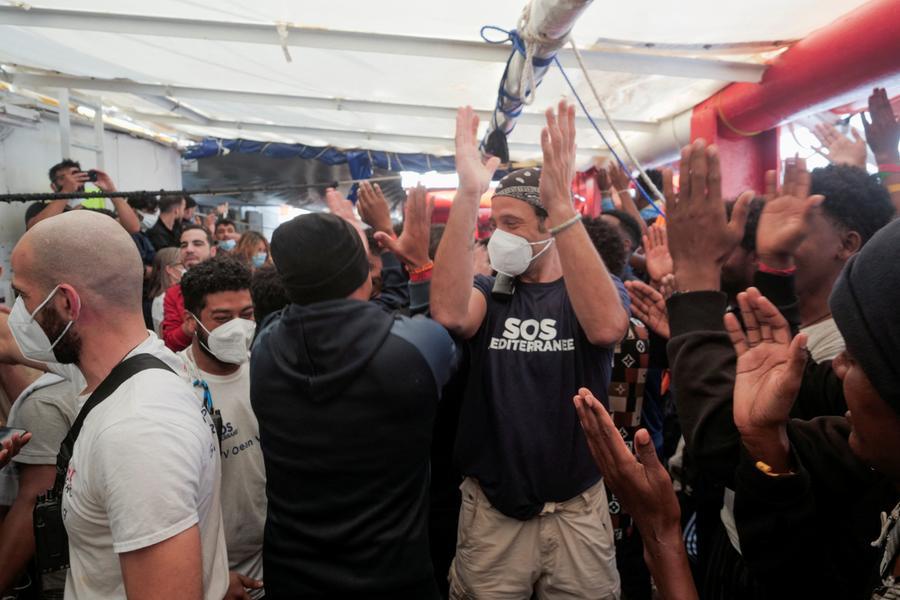 BRUSSELS, Nov 25, 2022 (BSS/AFP) - European interior ministers gathered for crisis talks on Friday as an ugly row between Paris and Rome over how to handle would-be refugees forced EU migration reform back onto their agenda.

New arrival numbers haven't yet hit the levels of 2015 and 2016, but European capitals are concerned about new pressure on sea routes from North Africa and overland through the western Balkans.

And now, with winter temperatures descending on eastern Europe and Ukrainian cities facing power cuts under Russian bombardment, the European Union is braced for many more war refugees.

The bloc has been struggling for years to agree and implement a new policy for sharing responsibility for migrants and asylum seekers, but a new dispute has brought the issue to the fore.

Earlier this month, Italy's new government under far-right leader Georgia Meloni refused to allow a Norwegian-flagged NGO ship to dock with 234 migrants rescued from the Mediterranean.

The Ocean Viking eventually continued on to France, where authorities reacted with fury to Rome's stance, suspending an earlier deal to take in 3,500 asylum seekers stranded in Italy.

The row undermined the EU's stop-gap interim solution to the problem, and Paris called Friday's extraordinary meeting of interior ministers from the 27 member states.

Complaints from Mediterranean countries closer to North African shores like Italy and Greece that they were shouldering too much responsibility for migrants led to the previous plan.

A dozen EU members agreed to take on 8,000 asylum seekers -- with France and Germany taking 3,500 each -- but so far just 117 relocations have taken place.

- 'Nothing new' -
But after Italy refused responsibility for the Ocean Viking, France has declared that it no longer wants to both allow ships to arrive from Italian waters and take in thousands more.

On Monday, in a bid to revive the mechanism, the European Commission unveiled another action plan to better regulate arrivals on the central Mediterranean route.
"Obviously the meeting was set up following the spat between Italy and France over the migrants aboard the Ocean Viking," a European diplomat said.

"The action plan that was shared with member states is perfectly fine, but contains nothing new, so it isn't going to solve the migration issue."

Stephanie Pope, an expert on migration for the aid agency Oxfam, dubbed Brussels' plan "just another reshuffle of old ideas that do not work".
"It is a waste of time," she said.

The plan would see a closer coordination between EU national authorities and humanitarian NGOs on rescues of migrants whose make-shift, overcrowded boats are in difficulty.

And it would see Brussels work more closely with Tunisia, Libya and Egypt to try to stop undocumented migrants boarding smuggler vessels in the first place.

France would like a new framework within which NGO boats could operate -- neither a total ban nor a carte blanche to import would-be refugees.
Italy, Greece, Malta and Cyprus often accuse the humanitarian charities of operating without respect to national authorities and of effectively encouraging immigration.

Other member states, including Germany, argue that there can be no limits on humanitarian operations -- all seafarers are obliged by the law of the sea to save travellers in danger.

Ahead of the talks, the UN High Commissioner for Refugees, Filippo Grandi, warned: "With almost 2,000 people having already died or gone missing so far this year alone, urgent action is needed."

While France and Italy argue about high-profile cases of dramatic rescues in the central Mediterranean, other EU capitals are more concerned about land routes through the Balkans.

Almost 130,000 undocumented migrants are estimated to have come to the bloc since the start of the year, an increase of 160 percent, according to the EU border force Frontex.

On Thursday, the Czech, Austrian, Slovak and Hungarian ministers met in Prague ahead of the trip to Brussels to stress that this route accounts more than half of "illegal arrivals" in the bloc.

Austrian interior minister Gerhard Karner said the EU should finance border protection and give members "a legal tool to return people who come for economic reasons".
Diplomats said France and Italy would try to dominate the talks with complaints about sea arrivals, while Greece and Cyprus would point fingers at Turkey for allegedly facilitating illegal entries.

Central and eastern countries would focus on the Balkans route and, as one diplomat said, "Hungary and Poland don't want anything to do with anything in the field of migration."