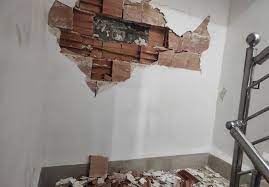 "The quake that hit at a depth of 10 kilometres (6.2 miles) in West Azerbaijan province has injured 528 people, 135 of whom have been admitted to hospital," the region's governor Mohammad Sadegh Motamedian told state television.

The quake and its aftershocks "damaged 500 houses, completely destroying 50 of them, in 12 affected villages," he added.

State television aired footage of stores damaged and homes destroyed in the 3:30 am (0000 GMT) quake.

National emergency services spokesman Mojtaba Khaledi told the state broadcaster that "electricity and water have been cut in some villages" near the cities of Salmas and Khoy, which lie close to the epicentre of the earthquake.

In 2003, a 6.6-magnitude quake in southeastern Iran levelled the ancient mud-brick city of Bam and killed at least 31,000 people.