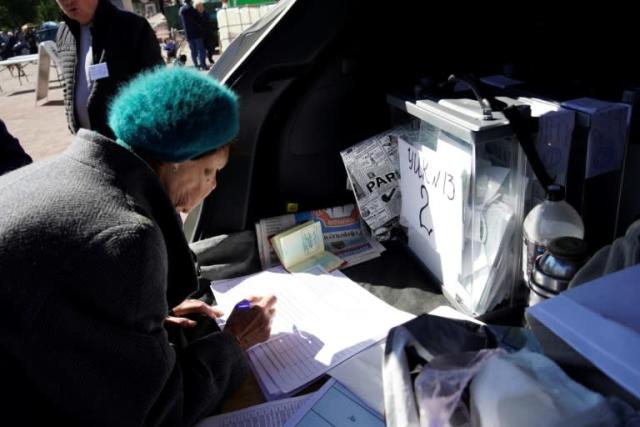 Kyiv and its allies have denounced the votes as a sham and said the West would never recognise the results of the ballots which are ratcheting up the stakes of Russia's seven-month invasion.

Russian forces in Ukraine this month have suffered serious setbacks, both in the east and south of the country, which observers say pushed President Vladimir Putin to rush ahead with the vote to cement Moscow's authority there.

Putin said Russia would use any and all available means to defend its territory, implying that after the four regions were annexed Moscow could deploy strategic nuclear weapons to repulse Ukrainian attempts to take back the territory.

He also announced that Moscow was calling up 300,000 reservists, a move that sparked some protests and saw Russian men fearing deployment to Ukraine flee to neighbouring countries.

The four Russian-occupied regions of Ukraine -- Donetsk and Lugansk in the east and Kherson and Zaporizhzhia in the south -- announced that they would hold the votes just days before voting began on Friday.

US President Joe Biden said the polls were a "sham" and little more than a "false pretext to try to annex parts of Ukraine by force".

Even Moscow's closest ally since the start of the invasion, Beijing, said after the votes were announced that both Russia and Ukraine should respect territorial integrity in the war.

Kremlin-backed leaders in the regions have said provisional results could be expected around Tuesday evening or in the days that follow.

Lawmakers would then be expected to vote to formally annex the four territories, which would need Putin's signature to be enacted.

The so-called referendums follow a pattern that Moscow utilised in 2014 to annex the Crimean peninsula from Ukraine in the wake of national street demonstrations that saw the country's Kremlin-friendly president ousted.

Like then, the outcome of the ballot is being viewed by observers as a foregone conclusion. Election officials brought ballot boxes door-to-door in many cases accompanied by armed Russian forces.

The UK government ahead of the final day of voting sanctioned 92 Russian individuals and entities for their various roles in the voting.

"Sham referendums held at the barrel of a gun cannot be free or fair and we will never recognise their results," Foreign Secretary James Cleverly said in a statement.

"I was told by the soldiers who came to our village that they saw a burial place of soldiers, but they didn't specify the number," said Lyudmyla Vakulenko, head of the Kozacha Lopan local administration.

The village is in the eastern Kharkiv region where a counter-offensive by Ukrainian troops saw dozens of towns and villages recaptured.