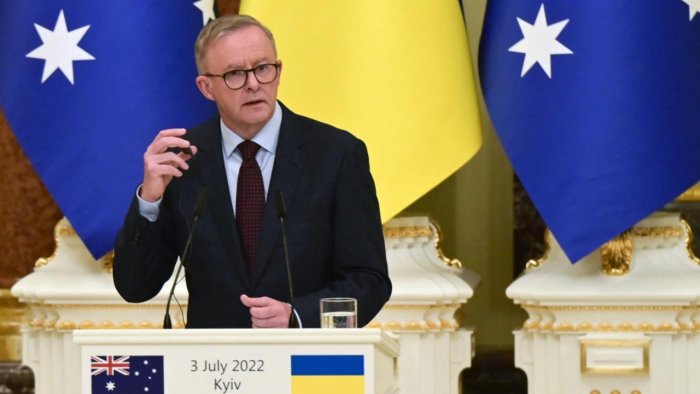 Making the first ever visit to Ukraine by an Australian premier, Albanese said at a news conference in Kyiv that his country would give Ukraine "a hundred million dollars of military support", without specifying if he meant Australian dollars.

This figure in Australian dollars would amount to US$68 million.

The prime minister specified that Australia would provide extra military equipment requested by Ukraine including 14 armoured personnel carriers, 20 Bushmaster armoured vehicles and a number of drones.

Albanese toured the towns of Bucha and Irpin where Russian forces are alleged to have committed war crimes, as well as the airport at Gostomel northwest of Kyiv.

"It is my great honour to be the first Australian prime minister to visit Ukraine," he said, adding that his trip "would show very clearly to the world the solidarity that exists between the Australian people and the people of Ukraine".

He paid tribute to the "courage, resilience, bravery and determination" of Ukraine's president, defence forces and people, saying they were "determined to stand up to a bully which is breaching international law without any provocation or any excuse".

The Australian politician also said that Russian President Vladimir Putin would get the "reception he deserves" if he attends a G20 summit in Bali in November, as the Kremlin has suggested he will.

"If it is the case that Mr Putin attends that meeting... he will get the reception that he deserves, which is not one of a friend, of someone who respects the international rule of law," the Australian premier said.

At the same time, he said he could not imagine Australia would boycott the event, while "we believe in isolating Russia as much as possible".

Ukraine last month announced that an Australian man had died while fighting for the International Legion of Defence of Ukraine, an official volunteer brigade.