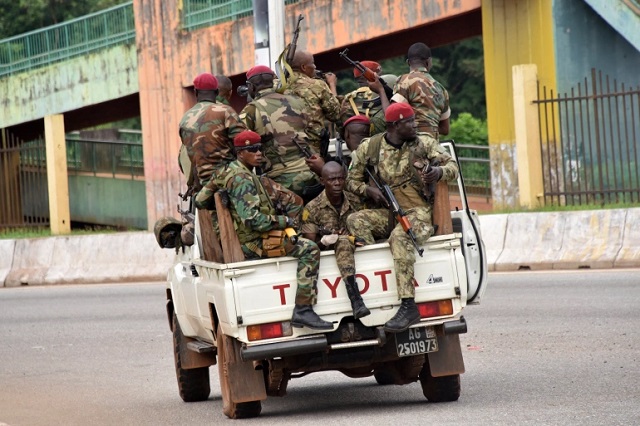 BEIJING, Sept 6, 2021 (BSS/XINHUA) - International organizations such as
the United Nations (UN), the African Union (AU) and the Economic Community of
West African States (ECOWAS), as well as some governments condemned the
military coup in Guinea on Sunday and called for release of the country's
president.

Earlier on Sunday, heavy gunfire was heard in the urban commune of Kaloum,
downtown Conakry, in Guinea, where the Presidential Palace and several
ministerial departments are located.

In the afternoon, Guinea's Defense Ministry said in an official press
release that "the Presidential Guard, supported by the defense and security
forces, contained the threat and pushed back the group of insurgents."

However, later in the day, Lieutenant-Colonel Mamady Doumbouya announced on
national television that his forces have arrested President Alpha Conde, and
dissolved the government and national institutions.

The country's borders were closed and its constitution was declared invalid
in the announcement.

A video posted on social media showed that Conde was surrounded by a group
of armed soldiers, but the capturing time and place of the video remain
unclear.

UN Secretary General Antonio Guterres, the European Union, the AU and
ECOWAS all condemned the coup in Guinea on Sunday and demanded that the
rebels release Conde.

Guterres posted on twitter that "I am personally following the situation in
Guinea very closely. I strongly condemn any takeover of the government by
force of the gun and call for the immediate release of President Alpha
Conde."

The 55-member AU also called for an immediate release of Conde in a
statement.

Felix Tshisekedi, president of the Democratic Republic of the Congo, who is
also the current AU chairperson, and Moussa Faki Mahamat, the AU Commission
chairperson, further called on the AU Peace and Security Council to meet
urgently to examine the new situation in Guinea and to take appropriate
measures in the circumstances.

"ECOWAS decidedly condemns this attempted coup d'etat that happened on
Sunday," the community said in a statement, demanding the safe release of
President Conde and other detained people.

The Nigerian government on Sunday condemned the takeover of power by force
in Guinea. "The government of Nigeria strongly condemns and rejects any
unconstitutional change of government and therefore calls on those behind
this coup to restore constitutional order without delay and protect all lives
and property," Nigerian Foreign Ministry spokesperson Esther Sunsawan said.

EU High Representative for Foreign Affairs and Security Policy Josep
Borrell condemned in a tweet the coup in Guinea, calling on the rebels to
release President Conde.

In a statement, U.S. State Department spokesperson Ned Price also condemned
the seizure of power by the military in Guinea, urging all parties to avoid
violence and engage in dialogue.