Five to die for killing girl after gang rape in Rangpur 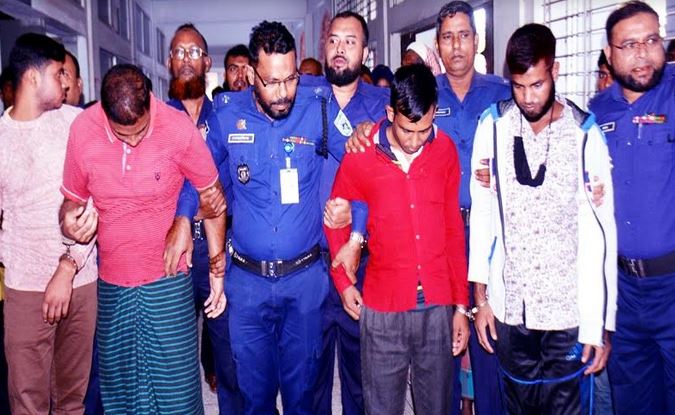 RANGPUR, Nov 24, 2022 (BSS) - A court has sentenced five youths, including prime accused lover of a teenage girl, to death for gang-raping and killing her in village Narsingha Mornea of Gangachara upazila here seven years ago.

At the same time, the court ordered a fine of one-lakh Taka each.

Judge of the Women and Children Repression Prevention Tribunal-2 of Rangpur Md. Rokunuzzaman handed down the verdict this afternoon.

Four convicts, including prime accused Abuzar Rahman, were present in the court while convict Alamgir Hossain is absconding.

According to the prosecution, Abuzar developed a love relationship with a teenage girl, 15, of the same village.

At one point the girl became pregnant. In this situation, she pressured Abuzar for marriage. But, he refused.

When the girl threatened to tell her family and villagers about their love affair, her lover Abuzar, planned to kill her.

On the day of the incident on May 14, 2015, the victim's father and mother went to a wedding ceremony at nearby Lalmonirhat district. At that time, the girl and her niece were alone at home.

Taking the advantage, Abuzar went to his lover's house in the evening with his associates and took her to a nearby field and gang-raped her.

Later, they killed the girl with native weapons and fled from the scene.

After returning home that night, the victim's parents searched all possible places without finding their daughter.

The next morning, the victim's parents recovered her body from a nearby field after receiving information from neighbours.

After the investigation, Investigating Officer of the case Sub-inspector of Gangachara police station Tauhidul Islam submitted a charge sheet to the court against five people, including prime accused Abuzar.

After examining 10 witnesses, the court sentenced the five accused to life imprisonment and fined them Taka one lakh each.