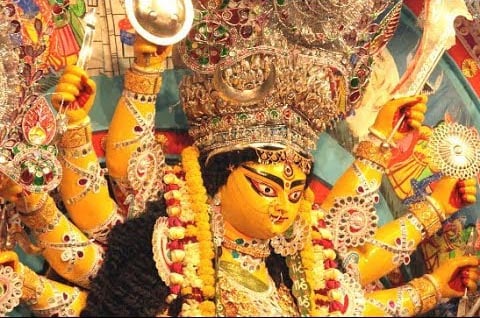 CHATTOGRAM, Oct 1, 2022 (BSS)-The five-day-long Sharadiya Durga Puja, the biggest religious festival of the Bengali Hindu community, began today in the city and as elsewhere in the district amidst traditional enthusiasm and due solemnity.

The celebration began with Bodhan (the process of infusing life into the idol) and will end with the immersion of Goddess Durga on (Wednesday)Bijoya Dashami.
A large number of Hindu devotees were seen assembling at all the puja mandaps to offer Shasti in different areas in the city and district.

A good number of Hindus from all walks of life visited the JM Sen Hall and Ramkrishna Mission which are considered to be the central attraction of venues of the Durga Puja here.

Meanwhile, a total of 2,328 puja mandaps, including 266 in the city, have already been set up this year in 15 upazilas of the district.

Police, district administration and leaders of the Hindu community are on frequent touch and exchanging views with each other so that Durga Puja can be celebrated in a peaceful manner like previous year, community and administrative sources said.

They said, a six to eight members team of law enforcers drawn from police and Ansars have been deployed in each Puja Mandaps in the city and the district.

Both district and Chattogram Metropolitan Police (CMP) administrations have already canceled leaves of all police officials excluding the members of the Hindu community and opened separate control rooms at their respective headquarters to monitor the situation round the clock.

The CMP authority also formed a good number of striking forces, necessary platoons of APBN to face any problems, the CMP sources said.

Besides, setting up of huge check posts, nearly 150 Closed Circuit Television (CCTV) cameras would also be set up at different strategic points to monitor the security measures arranged for devotees after and before the Puja celebration.

All the entry points of the city like Shah Amanat Bridge, City Gate, and Oxygen Mor in the port city were brought under tight security measures with CCTV monitoring. Necessary instructions were also given to search for suspicious persons at any point during the festival.

On the other hand, Rapid Action Battalion (RAB)-7 has already taken all-out security measures to make the holy occasion a total success.