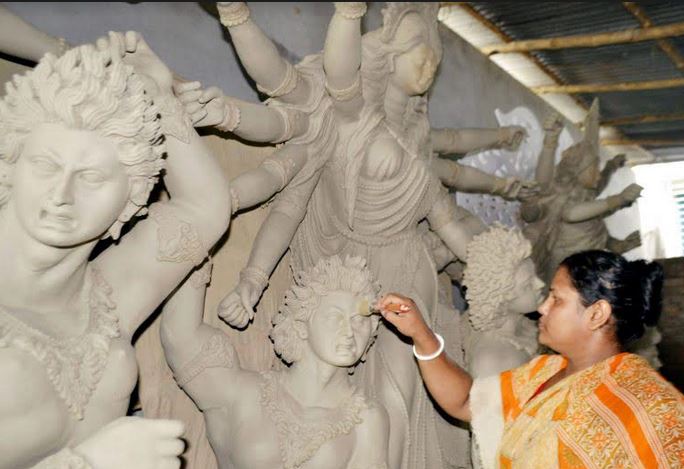 RAJSHAHI, Sept 26, 2022 (BSS)- Preparation for celebrating the forthcoming Durga Puja, largest religious festival for the Hindu community, is going on everywhere in Rajshahi division including the Rajshahi metropolis at present.

People of the community are passing their busiest days with the works of decorating and painting idols and puja mandaps ahead of their festival.

Idol makers commonly known as Pauls are passing their busy days in the final touch works of idols of Hindu deities. With only four days left, the Pauls are working round the clock to make sure that the idols are ready in time.

Kartik Paul, who is involved in the idol-making profession for over 24 years, has made 34 idols in the last two months in the current season and has been working for some others at present. Taka 30,000 to 60,000 are spent for each of the idols, he said.

He said that about one hundred Paul groups of Rajshahi are now busy making idols for mandaps and they have already completed 90 per cent of the work of making the idols.

Swapon Ghosh, a devotee who supervises a puja mandap in Kumarpara area of the city, informed that preparations for the upcoming Durga Puja are on the final stage.

Decorations of temples, lighting, and setting up of mandaps are expected to turn the city into a festive look within the next couple of days, he added.

Deputy Inspector General of Police Abdul Baten told BSS that the Durgotsob will be celebrated in 3,563 puja mandaps in all eight districts under the Rajshahi division in addition to 96 in Rajshahi city this year from October 1 to 5.

Police administration of all the respective areas have chalked out elaborate security measures to make the celebration a total success, he added.

Rajshahi Metropolitan Police (RMP) has intensified intelligence surveillance ahead of the Durga Puja in the metropolis.

"We are determined to celebrate the religious festival amid enthusiasm and communal harmony," said Abu Kalam Siddique, Commissioner of RMP, adding they have adopted tight security measures to make the durga puja celebration festive and successful.

Meanwhile, Rajshahi City Corporation has planned to keep the city neat and clean during the upcoming celebration of Sharodiya Durga Puja-2022.

To this end, the city corporation has adopted multifarious measures so that the celebration could be more festive and enthusiastic among the devotees.

Ahead of the religious festival, the city corporation held a coordination meeting at its conference hall recently.