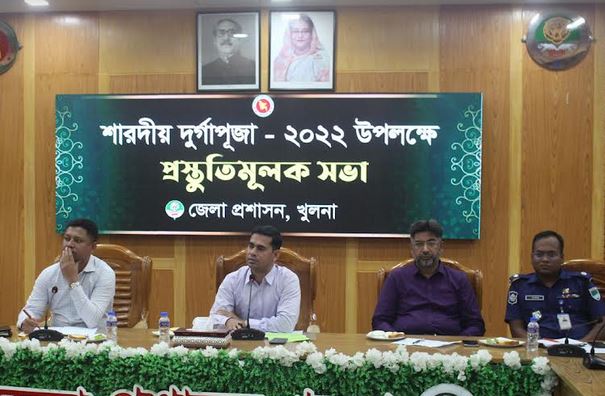 KHULNA, Sept 25, 2022 (BSS) - Idols makers at different places across the district are passing busy time as Durga Puja, the biggest religious festival of the Bangalee Hindus, is only a few days away.

The five-day Sharodiya Utsab will begin on October 1 and conclude on October 5 through the immersion of idols. This year, Durga Puja will be celebrated at 1,030 mandap in the district.

Artisans at different temples in Khulna city and other parts of the district are giving the finishing touches to idols ahead of Durga Puja.

General Secretary of City Unit Puja Udjapon Parisad Prashanta Kumar Kundu told BSS that a total of 130 mandaps has been set up in the Metropolitan city while 900 mandaps have been set up in all nine upazilas of the district.

Around 450 idol-makers are engaged in making idols for Durga Puja in Khulna, he said.

While visiting the largest Dharmasava Puja mandap in the city this reporter found that artisans are now busy painting the images of deities to make the idols attractive to the devotees and the visitors.

He said the cost of raw materials including earth, rope, straw, bamboo and jute for idol shave have highly increased but their remuneration has increased a very few than the last several years.

Manash Kumar Ghosh, organizing secretary of Dharmasava Puja Mandap said that preparations for the Durga Puja have become costlier due to high price of the raw materials and increased charges of idol makers, purohits and dhakis.

Khulna Police Super Md Mahbub Hossain said security measures have been taken in each temple. A team of policemen along with ansars will be deployed at the temples during the puja.

He added that closed circuit cameras, different entrance system for men and women to be set up at all mandaps.