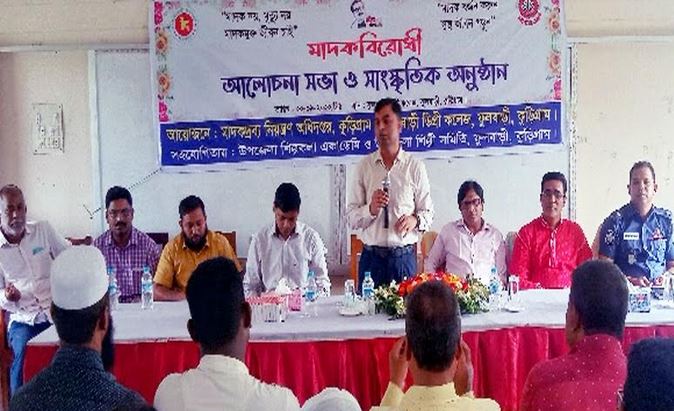 RANGPUR, Sept 22, 2022 (BSS) - Officials, educationists and cultural
activists at an anti-drug discussion today stressed on resisting drug abuse
to save the young generations for building a healthier and prosperous nation.

The District Department of Narcotics Control (DNC) and Fulbari Degree
College jointly organized the discussion followed by competitions on general
knowledge and a cultural function at the hall room of the college in Fulbari
upazila town of Kurigram district.

The events were arranged aiming at creating awareness among the students
about severe consequences of drug abuse and drug addiction to save them from
ruining future and guide them to flourish their talents to become worthy
citizens.

With Principal of the college Aminul Islam Rizu in the chair, Fulbari
Upazila Nirbahi Officer (UNO) Suman Das attended the discussion as the chief
guest.

Assistant Director of the District DNC Abu Jafar narrated the grievous
impacts of drug abuse, drug addiction and trafficking and stressed on
creating adequate awareness among the young generations and common people for
building a drug-free society.

He also discussed various steps taken by the government and zero
tolerance policy towards drugs to prevent drug abuse and called for launching
a social movement to save the young generations to flourish their talents in
a congenial atmosphere.

Principal Rasheduzzaman Babu put importance on sensitizing the students
and youths about the catastrophic consequences of drug aggression through
launching a decisive social movement against drug abuse.

The UNO said eradication of drug abuse has become a burning need of the
time to save the young generations for their normal growth to turn them into
worthy citizens so that they could efficiently lead the nation in the future.

Later, prizes were distributed among the winning students of the
competitions on general knowledge followed by the cultural function.