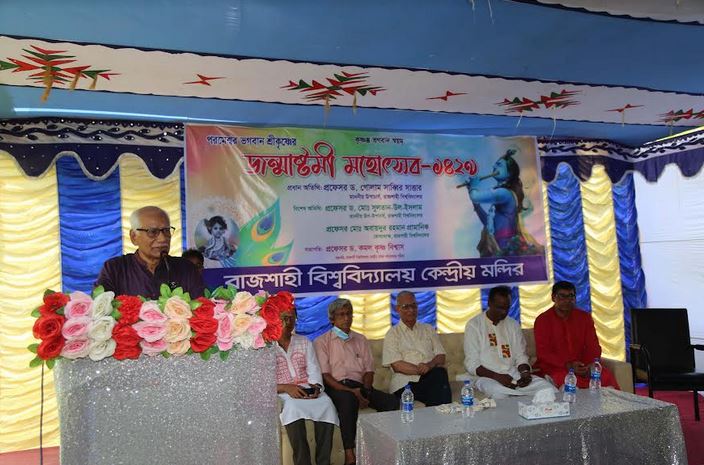 RAJSHAHI, Aug 18, 2022 (BSS) - Janmastami, the birth anniversary of Lord Sri
Krishna and one of the major festivals of the Hindu community, was celebrated
today amid festivity and religious fervour here as elsewhere in the country.

The day's programmes include worship of Lord Krishna, GeetaJagna, Kirtan,
rally, distribution of sweetmeats and discussions.

As part of the celebration, members of the Hindu Darmiyan Kalyan Trust held a
Janmastami celebration function at Keshabpur Shib Mondir in the city.

Panel Mayor of Rajshahi City Corporation Shariful Islam addressed the meeting
as the chief guest, while Trustee of Hindu Darmiyan Kalyan Trust Tapan Kumar
Sen was in the chair.

Shariful Islam called for following the ideals and teachings of Lord Krishna
to maintain peace, harmony and stability in the society.

Bangladesh, he said, is an instance of communal harmony where people of all
the religions have been observing their respective religious festivals freely
for long.

Meanwhile, Rajshahi University (RU) administration celebrated the Janmashtami
on its campus in a befitting manner.