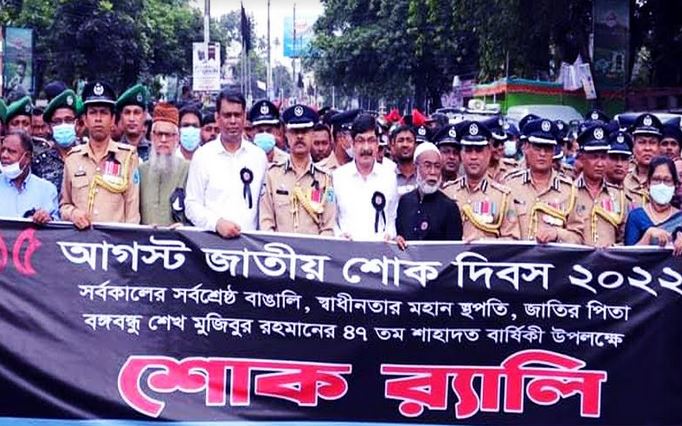 RANGPUR, August 15, 2022 (BSS) - The National Mourning Day-2022 and 47th
martyrdom anniversary of Father of the Nation Bangabandhu Sheikh Mujibur
Rahman was observed here today with a fresh vow to build a developed 'Sonar
Bangla' as dreamt by Bangabandhu.

The observance began with hoisting of the national flag at half-mast atop all
government, semi-government, autonomous, private buildings and educational
institutions after sunrise.

A smart contingent of Rangpur Metropolitan Police gave a guard of honour in
front of the Mural of Bangabandhu in presence of high officials followed by
observance of a one-minute silence paying due respect to Bangabandhu and
offering special munajats there.

Milad mehfils were organised and special munajats offered at all mosques
after the Johr prayers and at mandirs, churches, pagodas and educational
institutions at convenient times seeking divine blessings for the departed
soul of Bangabandhu.

Recitation from the Holy Quran, special discussions on the life and works of
Bangabandhu and milad mehfils were arranged at government shishu paribars.

The District Shishu Academy organised competitions on poem recitation,
drawing and ready speech for children focusing on the life, works and
sacrifice of Bangabandhu and true national history.

Islamic Foundation organised programmes including recitation from the Holy
Qur'an, Hamd, Na'at and Doa mehfil and a discussion on the life and deeds of
Bangabandhu at its auditorium in the city.

The district administration arranged the main discussion at the District
Shilpakala Academy auditorium with the Deputy Commissioner in the chair.

The divisional and district level high officials, heroic freedom fighters,
leaders of the district and city units of AL and noted personalities
participated in the discussion.

The district, city and upazila units of AL and its associate bodies,
district unit of Bangladesh Muktijoddha Sangsad, Joybangla Sangskritik Oikko
Jyote and many other organisations observed the day with elaborate
programmes.

Besides, the district and city units of AL distributed foods among the poor
and destitute people at their respective offices and orphanages and madrashas
in the city.

President of district AL Mamtaz Uddin Ahmed presided over a discussion at
its office while its General Secretary Advocate Rezaul Karim Razu moderated
the event.

President of city AL Shafiur Rahman Shafi presided over another discussion
at its office moderated by its General Secretary Tushar Kanti Mandal.

Leaders of the district and city units of AL and associate bodies addressed
the discussions.