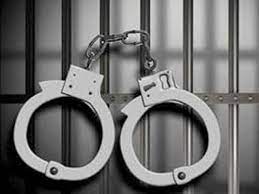 CHANDPUR, Aug 12, 2022 (BSS) - The Naval police during a drive arrested five suspected robbers along with pipe guns and sharp weapons from the Dohuri canal near Padma river in Chandpur last night.

The arrested persons were identified as Md. Abul Bashar, 22, Md. Akhtar Hossain, 30, Iqbal Munsi Prakash Sumon, 28, Shakil Dewan, 21 and Md Yamin, 19. All of them were residents of Munshiganj district.

He said around 12 to 13 robbers were preparing for robbery using speedboats in Padma river.

They have several robbery cases against their name, he said.