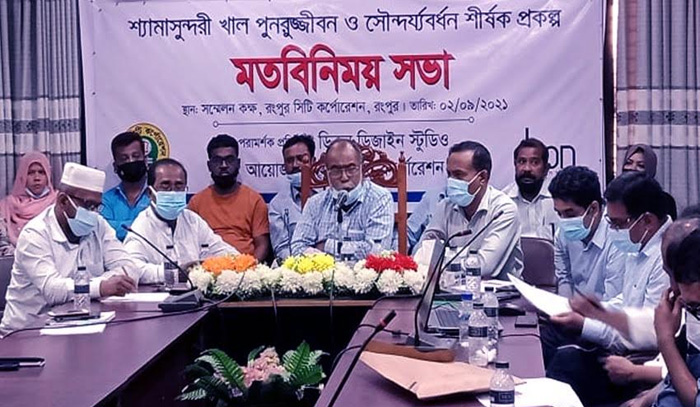 RANGPUR, Sept 3, 2021 (BSS) – Restoration of the Shyamasundari Canal has become crucial to maintain water flow round the year for beautification, cleanliness, stopping mosquito breeding and improving the environment in Rangpur city.

Officials and public representatives opined this at a views-sharing meeting arranged under the Shyamasundari canal restoration and beautification project organised by Rangpur City Corporation (RpCC) at its conference room here on Thursday afternoon.

The participants discussed the historical background of digging of the 16-km long Shyamasundari Canal with 23 to 90 feet width some 130 years back in 1890 to save the people of Rangpur town from deadly mosquito- and water-borne diseases.

The then King of Dimla Empire Janaki Ballav Sen dug the canal named after his mother Shyama Sundari from the entry point of the river Ghaghot to the Khoksa Ghagot point in 1890 and the canal flowed through the midline of Rangpur city.

Width of the canal was reduced to eight to 10 feet at many places, turning it into an extremely dirty place and safe haven for mosquito breeding due to land grabbing on both sides of the canal that was being considered as the life-line of Rangpur city.

The City Mayor stressed on proper re-excavation and revival of the Shyamasundari Canal and implementation of the proposed project and other works to keep the Canal live round the year for beautification of the metropolis.