Gas situation in industries to see improvement in January: Tipu 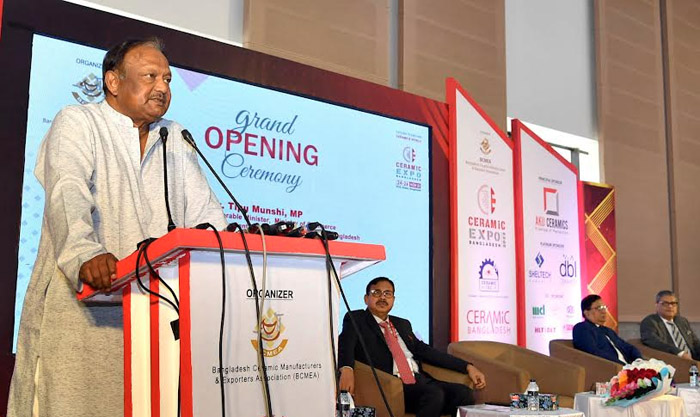 DHAKA, Nov 24, 2022 (BSS) - Commerce Minister Tipu Munshi today said that the existing situation over the availability of energy like gas in the industries would be improved in January.

He also said that the gas crisis has become evident in the country due to the global situation for which production in the industries has also being hampered to some extent.

"It's a temporary problem, hopefully the situation will be improved in January," Tipu said.

The commerce minister said this while addressing the inaugural session of the 3rd edition of the three-day Ceramic EXPO Bangladesh-2022 held at the International Convention City Bashundhara in the capital.

Bangladesh Ceramic Manufacturers and Exporters Association (BCMEA) has been organizing this exposition.

Tipu informed that he would convene a meeting soon to discuss and thus resolve the problems that the industries and businesses are now facing. Businessmen across the board will be invited to that meeting.

He said the purpose of that meeting would be to identify the problems and thus place those before the Prime Minister for further action.

The government would work sincerely to address those issues, he added.

He mentioned that the Prime Minister of her own has taken initiatives to resolve the existing problems being faced by the business community while hopefully those problems would be resolved soon.

The Commerce Minister also assured that necessary support would be provided to the businessmen so that they could boost the production and export of ceramic items.

BCMEA President Sirajul Islam Molla said that more than 70 industries in the ceramic sector are in operation in the country producing ceramic, tableware, tiles and sanitary items while the annual sale of ceramic items in the local market reaches around Taka 8,000 crore.

Molla also said this sector has a local investment of around Taka 15,000 crore.

A total of 150 brands representing some 120 industries of 20 countries including Bangladesh are taking part in this expo, which is also being regarded as the largest ceramic expo in Asia.

The expo will remain open for the visitors everyday from 10 am to 7 pm.